Tax Essentials for Expats in Italy 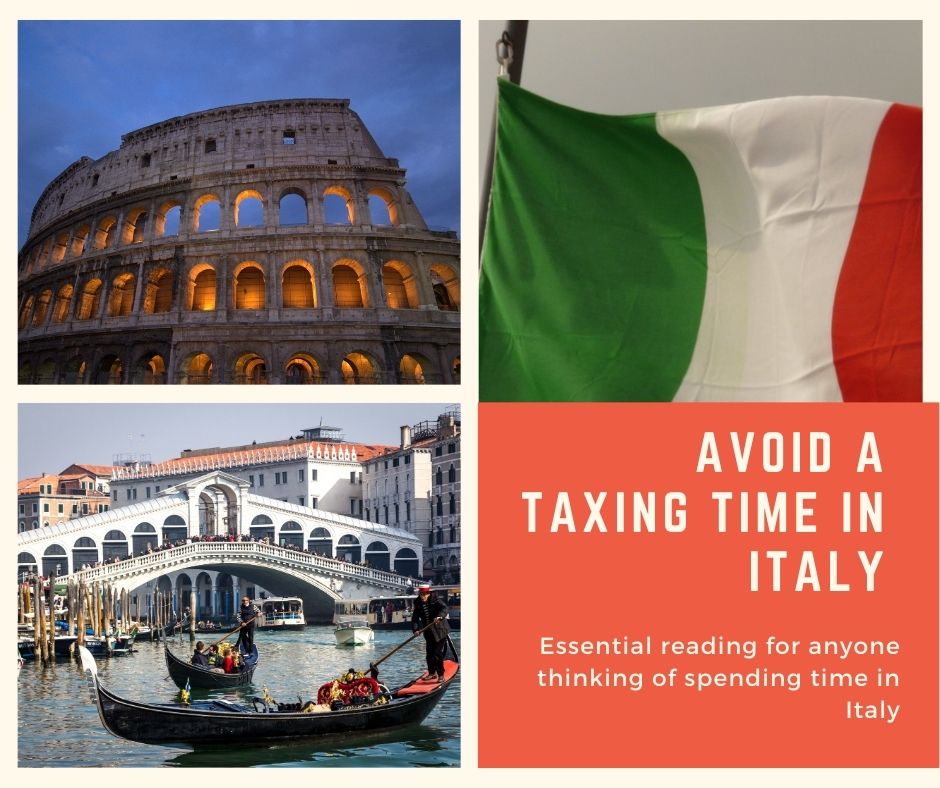 Our Financial section is provided by our tax expert Gareth Horsfall

Gareth Horsfall is manager and financial planner for The Spectrum IFA Group in Italy. He's helped the English speaking community in Italy with their financial and tax planning since 2004 and has built up a wealth of experience and knowledge to assist people living in, or thinking of moving to Italy permanently.

Gareth has an Italian family and is a great advocate of life in Italy but admits that it takes careful preparation before making your move to navigate the bureaucracy and traps that many seeking a dream life in Italy fall into. Saying that, with a bit of planning, life in Italy can be really amazing and you can enjoy the wealth of culture, art, history, food, people, sun, sea and mountains that 'Il bel paese' provides.

If you are thinking of moving to Italy, then there are more than just your dream job/house/regional concerns to think about.  One of the biggest is the need to plan your finances correctly before you arrive.

2021 saw yet another change of political leadership and Mario Draghi was announced as the new head of the technocrat government in Italy.

This ‘could’ mean sweeping structural tax code changes and may mean you need to think differently about your life and money in Italy.

Talk of tax reforms in Italy seem to be par for the course with every new administration.  In more recent times there was Matteo Renzi from 2014-2016  and the flat tax plans of Matteo Salvini during his time in power.  Neither really garnered sufficient political support to do more than tinker around at the edges.

Mario Draghi, the new technocrat leader of Italy is proposing a radical overhaul to one of the world's most complicated tax codes, systems of deductions, detractions and incentives?

But exactly what is he proposing?

Draghi and his team want to make taxation more favourable for the mid-low income earners. They purportedly want to keep the current system of progressive tax rates but modify them to

The talk is that Draghi is very keen on the German model of progressive tax rates which can be seen below:

* Your rate of tax in this band is determined based on your total income.

° Married and civil partnership couples are assessed together and the band levels above are doubled (not the tax rates!)

In these bands, there is what is known as a nil tax band area or otherwise called a tax allowance.  Similar in structure to many other progressive tax regimes around the world, e.g. the UK and USA.

The nil rate band is particularly popular because the first 'x' amount of income is not taxed for anyone.  Presently, Italy has a system of tax credits, which mean that income is still taxed, even at a lower level, and then a tax credit needs to be applied for each year.

The big question is how does the Italian government fund what is effectively a tax reduction for most people.

They will purportedly do it in 3 ways:

The current complex system of deductions, detractions and bonuses/credits etc. could be overhauled, completely.

Personally, I am in favour of this kind of simplification.

The current system is far too complicated.  I often see that deductions and benefits are not claimed because you don’t know either they existed or your commercialista didn’t inform you because they don’t know you qualify.  Hence a simplified tax code would likely benefit more people who need it.

This is always a sensitive subject but a proposal is to reintroduce the idea of a tax on the Prima Casa: IMU. I am sceptical as to whether he would get that through because it is such a political hot potato in Italy, but it is being thrown about as an option. Another idea is to review the system of valore catastale. This value, which is used for a number of taxes (see below), has not been revised for many years and so is usually a value which can diverge widely from the true market value of a property.

A revision to bring the valore catastale and the market value of a property more in line with each other would be a clear increase in taxation and would increase the following imposte:

Imposta di Registro:  The tax paid to register the atto when a property is bought.

Imposta Ipotecaria:    Tax paid when a property is re-registered.

Imposta Catastale:     Transfer of a property into  another's  ownership.

(All the above are calculated using the valore catastale as their base value, with various coefficients applied to arrive at the correct taxation).

Most of the taxes listed above are for one off events, such as purchase or re-registration of a property. The valore catastale would also affect the ongoing taxes for property owners which are payable each year, namely:

One last tax reform could be the possibility of bringing a stop to various flat tax regimes.  Currently, Italy offers a range of flat tax offers to various categories of people.  The ones that mainly affect people who are thinking of moving to Italy are:

2. The 7% pensionati flat tax is the offer of a 7% taxation for a period of 10 years for anyone who is taking a pension income and takes up residence in a southern state in a comune with less than 20000 registered abitanti.

3. The €100000 per annum for 15 years, flat tax regime, to attract the wealthy to transfer their residency in Italy.

Mario Draghi is, supposedly,  not a great fan of flat tax regimes.  He may look to overhaul the system with these in mind.

The third, is proposing to raise tax revenue, without raising taxes on the most needy, is to come  down hard on tax evasion.

For anyone moving to Italy then you need to know that the Common Reporting Standard is an agreement reached in 2016 by almost all countries in the world to share financial information: tax, income, assets etc., based on the residency of an individual and not the location where an asset is held.  We have seen this information exchanged under this agreement used on a number of occasions.

If you have reported your finances incorrectly or have failed to declare them in Italy, even unintentionally, the tax code does not make exceptions for 'I didn't know I had to do it'.

Given that Draghi is stating that he wants to go after undeclared assets, then I would suggest that undeclared assets/incomes ‘abroad’ will be low hanging fruit for the Agenzia delle Entrate (tax authority) and hence easy pickings. So, when you move to Italy, simply remember:

'If in doubt, declare the account' (and your income/assets/gains too)

And don’t forget to put as much importance on your finances as you might your job and/or living arrangements.  Plan your move carefully and thoughtfully.   Italy is a truly amazing place to live, but you don’t need unexpected surprises.