Many times our friends on our Facebook page, and subscribers to our newsletter, have shared their experiences of Italy with us.

This story, about Sardinia, was shared by Lexa Dudley, acclaimed author of The Whispering Wind and Children of the Mists - two romantic novels set on the island of Sardinia.

I've always loved Sardinia and I have a fair bit about the wonderful beaches (the best in Europe) and the people of Sardinia elsewhere on the site. Lexa though has managed to capture the soul of Sardinia and, after reading her tale, you'll see why this island has enchanted poets, writers and ordinary visitors for centuries. 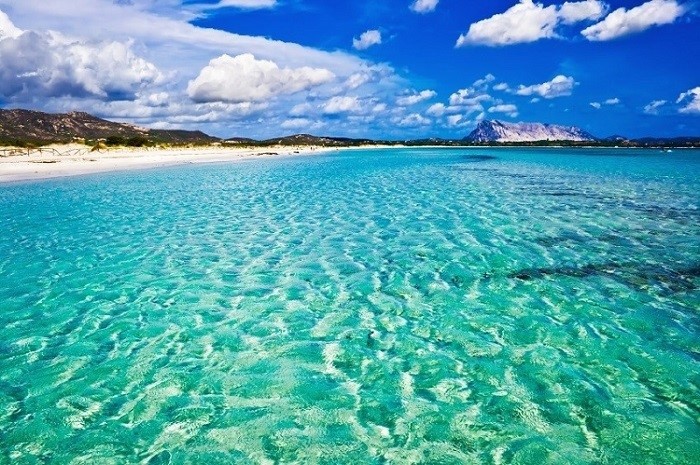 Why do you always go back to Sardinia? And where about is is exactly?

Sardinia has been described as The Forgotten Isle and, it is still relatively unknown today.  I go back to Sardinia every year because I fell in love with the island in 1972, when visiting with my family.

In those early years we had started up our own business, had four sons and holidays were a distant dream with hungry mouths to feed.  My father died and we came into a little money and decided that a holiday was the one thing, above all, that was needed for the family.

I asked a friend, who was a travel Agent, to organise something.  The wish list wasn’t too long.  We wanted an island holiday in the Mediterranean, a great beach, preferably Corsica, as I spoke French.  Everywhere proved to be full so we were booked into a new hotel in Pula at the south of Sardinia.  Needless to say we had to look it up on the map and prepared for the new adventure.  The rest, as they say, is history.

The moment I stepped off the plane at the old Airport at Elmas, which was no more than a large nissen hut, with departures and arrivals all in the same area, I was hooked.   Above the smell of the engine fuel was the scent of the macchia indigenous vegetation, strong in the afternoon heat.  In that moment Sardinia stole my heart.

Sardinia is a gentle, but persuasive lover; seducing you with long white beaches on the western coast and, small, secret coves on the eastern side; all washed by an emerald and sapphire sea. The mountains are majestic and the valleys enchanting. With vast areas of macchia, untouched except by the soft warm caress of the breeze which constantly passes over the island. 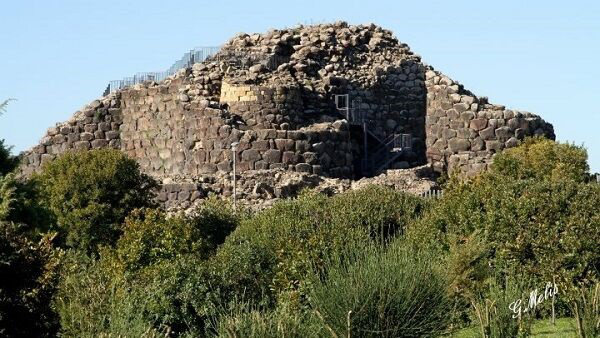 There are stories of Giants, with their tombs and, faires.

You become captured by the customs and traditions which have been nurchered since the Nuraghic people.  The ancient people haunt you with their Nuraghi, standing stones and sacred wells. 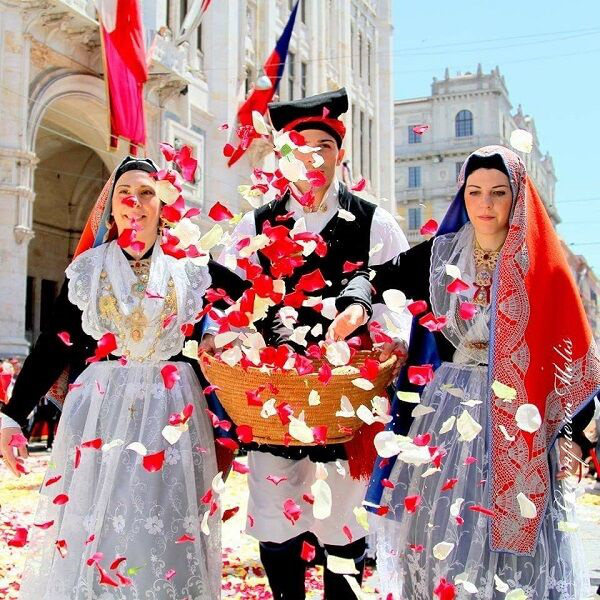 Then there are the Sards themselves; I find them courageous, curious, loyal and extremely hospitable.  It is little wonder that so many people fall in love with Sardinia.

The love I felt for the island that first day has grown over the years, as I have learned more about its people and their culture and it has become the home of my soul.

As a family we still talk about the BBQ we organised on the beach with another couple we met at the hotel.  Being May the weather wasn’t too predictable and it rained that evening.  One of the Sards, who had organised everything, came to find us and said he had arranged to have the meal up in the mountains behind the hotel, in a hunting lodge which belonged to the provider of the pig and his friends.

It was an extraordinary evening.  The men had cooked the suckling pig and provided the salad, wine and bread.

Over the years I have got to know the Sards and their customs and how different they are from the Italians, whom they call the continentals. Being an island race we have much in common, except the ancient Sards were farmers, not fisherman and were the keepers of their languages and traditions.

Their hospitality and patience is second to none as I have found with my endless questions about their island and their customs when researching for my books.

Some of the Sards we met that first year, have taken us all over the island to see the ancient sites and monuments and seen things that only the locals know.  We get taken to the local restaurants and experience the most amazing food and new friendships.

One of the Sards we met lives in San Sperate with his family and we would go and visit them and friends plus the numerous cousins and relatives they all seem to have - our families have grown up together.

It was at this time we met Pinucio Sciola, a young sculptor starting on his career.  He had carved two large stones that stood on a ridge marking the start of the Campidano, the great pain in the centre of Sardina, and later he carved the Madonna that is under the sea at Villasimius. 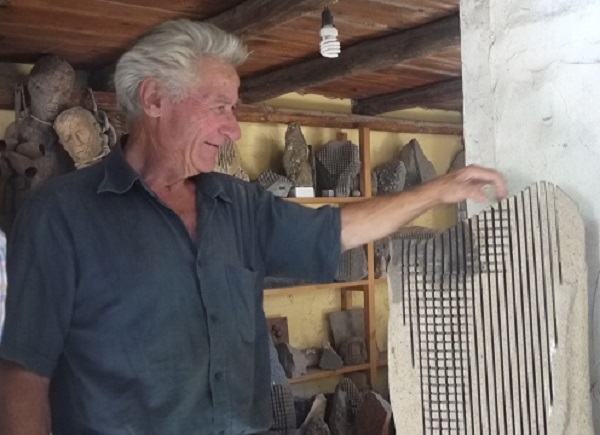 He became famous for his Singing Stones.  He noticed when he was sculpting that each stone had a different sound or resonance. He would carve wonderful patterns on the huge rocks and with a stone or his hands, running over the stones produced the individual sound of each one.

It was always funny to see visitors looking for the wires or microphones whenever he rubbed his hands over the stone to make it sing.

My sons always remember him for having a carved man made of olive wood, hanging in his tree in his old garden, looking to all the world like a corpse.

We have spent some wonderful hours in his garden at San Sperate where a lot of his work can be seen and heard and is well worth a visit.

San Sperate as a town gave me a presentation for my book The Whispering Wind last October.  Pinuccio was there to introduce me to everyone and to tell of our longstanding friendship.

Later that evening, he and a friend went back to his house and out into his garden.

It was a dark night and a quarter moon lay on her back in the black sky and from where I was standing it looked as if it was resting on one of the tall carvings.

Pinuccio took us to a ring of large stones and lit the huge pile of wood in the centre.  The flames shot up as he stood and fanned them with a large olive branch.

Smoke curled up on one side making the stones look like a volcano.  They became silhouetted against the bright flames and through the cuts he had made in the stones it was possible to see the flickering light.  We walked around the circle, each stone taking on a different shape as we passed it.  The light also caught Pinuccio as he stood by the fire.  Time slipped away.  We could have been in another time an ancient place full of magic and mystery.

After the fire died down we went to see the statues that had been lit by electric light.  It became a wonderland of light and dark shapes. There was one that looked like the universe with the way the carved stone caught the light and twinkled in the evening breeze.

It is a sight that will live with me forever and we all promised ourselves we would do it again, but it will not be as Pinuccio unexpectedly died in May this year, and is sadly missed. 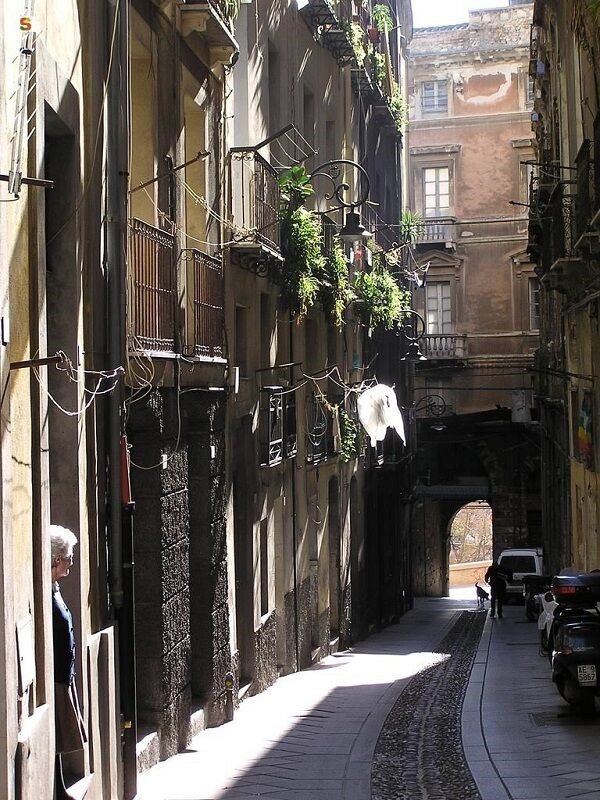 Once a year I try to go down to Sardinia on my own to go around the museums, the art galleries, find antique shops and generally go native.  I usually stay in the old part of Cagliari called Casteddu.  I love the narrow cool streets.  People are friendly and welcoming.

I still don’t speak Italian well, but I love to talk to the old people who remember Cagliari back in the 70s when there was no electricity in the houses and they shared a communal taps in the streets.  The bomb sites have gone and there is a peace and tranquility that hangs over this part of the city.  Even more so now, as most of the caged birds they used to have twittering outside their windows have gone but I miss their constant chirruping.  You still have to look upwards to make sure no one is hanging out their dripping washing on the lines across the buildings.

The port, which was a working harbour with sun burnished fishermen sitting on the quay mending their nets or selling fish from the morning catch, has now given way to a smart new marina with beautiful walkways and across the road the Via Roma with its arcade of shops full of exciting merchandise or cafes to sit and watch the world go by at the leisurely pace so reminiscent of Sardinia.  There are restaurants to find with excellent food and wine and an over whelming atmosphere of friendliness.

I love all the museums and recently discovered the Luigi Piloni museum in Via Universita.  I was lucky enough to spend a fantastic morning being taken around by a man who is a fellow collector of maps, books and prints of Sardinia and we had fun comparing what we had, with the wonderful pieces in the collection.

For the travellers who are happy to leave the beach there are some amazing sites.

Barumini, an ancient building called a nuraghe, unique to Sardinia and now a world heritage site. And nearby Casa Zapata, an old house built on top of a nuraghi and now a museum.  It is set in the Mamallia plain watched over by Las Plassas and the giara, where native horses roam.

The Sards have many festivals which are still for themselves, although visitors are welcome. You could probably find one for every day of the year, but the main ones are:

Sa Sartiglia in Oristano  -  Last Sunday and Tuesday before Lent

Local traditional costumes are worn by young and old and some of the festivals go back to the middle ages.

'And if you are still wondering where Sardinia is, it is below Corsica and above Sicily in the Mediterranean.' 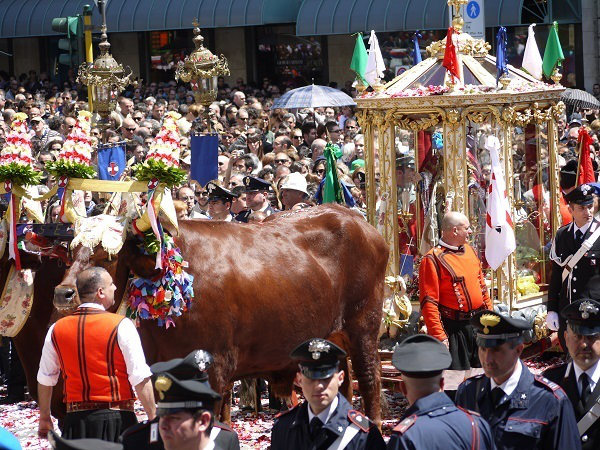