Castelmola - A World Above Sicily

A picture paints a thousand words, or so they say. As a write about Sicily especially, I often feel at a disadvantage to the throngs of tourists capturing their thousand words with each click of their camera phones. There’s just so much to see and describe.

On the other hand – and this applies to Castelmola – the atmosphere is, perhaps, best described in writing. It’s different here to anywhere else. Not better, just different. Obviously though, first prize is the actual experience of being here, and feeling the vibe first hand.

But before booking your ticket you want a taste, right? A sense of the place; a reason to go; and an idea of what to do there.

Here are 5 things we recommend...

There’s always debate in our family about which 5 things to include. With Maria being Italian and William having Italian blood and being "made in Italy", we just love to argue. But we do agree on the first thing to do in Castelmola:

1. Arrive on the Piazza San Antonio

Unless you’re one of the 2000-odd residents, arriving here means taking the road up from its sister-town of Taormina, which is not the most natural thing in the world to do. In fact, looking up at Castelmola, from the more popular Taormina, you’d be forgiven for thinking, what is a town doing way up there? Well, it was built to defend the town below.

The nice thing is, it’s not overrun with tourists. And the reason, again, is because it takes some effort, and some consideration, to get there – especially if you plan on going on foot.

Straight off the bat, I’d say don’t walk up, unless you’re the Olympian type. Walking down is more viable, if a little hard on the knees. It’s a very steep climb.

You can go by car, and given that Castelmola isn’t as busy as most Italian vacation spots, chances are you’ll find parking – which is limited – but the piazza is as far as your car will take you if you’re just here for the day. Cars aren’t permitted inside the town center.

Your best bet is to arrive by bus, which, when we last went, cost about 3 Euros for the round trip and took about 15 minutes each way. The buses are fairly frequent, but only operate in the daytime.

Having arrived, it’s time for the 2nd thing… 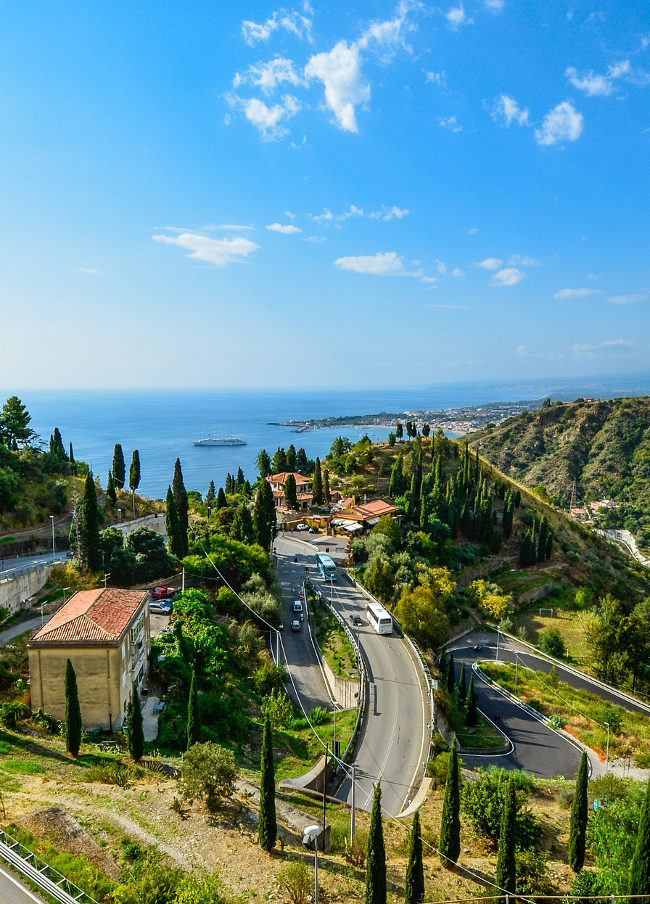 But from the Piazza San Antonio you can, in one sweeping panorama, see the Strait of Messina, the landmarks in Taormina, the Giardini-Naxos bay, the Cape of San Alessio and the mighty Mount Etna. Quite special.

Not forgetting the close up view: the Piazza San Antonio is special in its own right, with its mosaicked lava-stone paving, its historic lava-stone arch and the scattering of people enjoying the view, and the coffee, at the Cafe San Giorgio.

The narrow lanes leading off from the square hold the promise of untold discoveries; and that vibe I mentioned can be felt here too, perhaps created by the shared experience of being, in a sense, off the beaten track.

Signposts point to those discoveries, but Castelmola reveals its colorful history immediately.

The discoveries might be immediate but the savoring is long and slow.  Years later the memories  of Castelmola still return to bring a smile to your face and an ache to your heart. 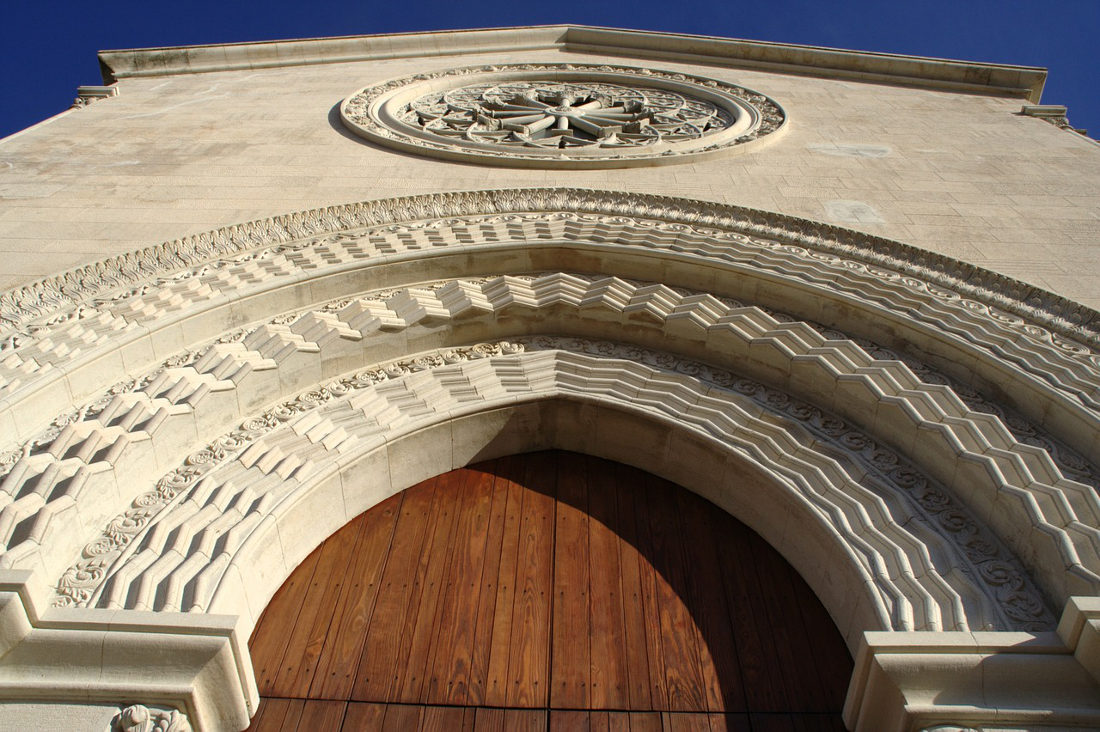 I know, I know, not the most original thing to do in Sicily. Seen one church, seen ‘em all, right? Not quite. Every church I’ve seen here, and I’ve seen a few, is memorable for something unique, like the statue of the Madonna in the Chiesa di San Antonio.

Doubling as the town’s auditorium, the church sits right there, on the piazza that shares its name. The Duomo

The church of St. Nicholas of Bari isn’t the biggest cathedral you’ll ever see, nor the oldest. Rebuilt in 1935, faithful to its mix of Romanesque, Arabic and Norman styles, it does retain its original frescoes. Oh, and check out its bell tower. It incorporates a view of Mount Etna which will sit in the old memory banks for a quite while, I assure you.

The Church of Madonna della Rocca, set into the rock of Mt Tauro, is simple, yet unusual. But I’ll leave you to discover this tiny church, its beautiful shrine and its charming legend for yourself.

I mention it because it leads me to the next ‘must do’ in Castelmola...

Well, this is not strictly a must-do because the walk to Mt Tauro and the castle for which the town is named is another physical feat. It helps to be fit. But from here, 2000 ft. above the sea, the view is even more spectacular; and one gets that sense of achievement of having reached the pinnacle of the Castelmola experience.

Although I know many an old Sicilian who’d say that the best has been left for last.

I say ‘share’ because of its effect. Drinking a bottle of almond wine on your own is not recommended. It’s quite the aphrodisiac, made from an infusion of almonds, herbs and-- Well, that’s a local secret. History tells us that the original owner of the Cafe Giorgio, Don Vincenzo Blandano, welcomed visitors by offering this delicacy.

Today almond wine is a specialty of the Café Turissi – but that establishment, and its somewhat risqué theme, is another thing left to your own discovery.

Needless to say, there’s a local festival here dedicated to the crushing of grapes. But Castelmola is also memorable for its food: homemade breads seasoned with olive oil from the local groves, rich fragrant honies, and "cuddure" (Easter cakes).

To sample the cuisine, I’d recommend Al Saraceno, for the view, the spacious terrace and the boned sea bass. But, this is again for the intrepid. Al Saraceno is at the highest point of Castelmona. Easier to get to, and also recommended, is Bocciòla on the Piazza Duomo.

We stay at the Borgo Medievale – Maria likes the onsite spa. The King Arthur inspired rooms are nonetheless modern, with private bathrooms, satellite TV, air-con and a balcony. There are only rooms 5 though, which are popular, so do book in advance.

Otherwise the Hotel Villa Sonia is just by the Piazza San Antonio. So you get that same panoramic view, and spacious rooms, comfy beds and a private bathroom. The restaurant quality is great, as is the wine selection.

If you have a car and prefer staying out of town, Antica Tenuta San Giorgio is, apparently, also a great option.

Unless you plan on arriving by helicopter, you have to first get to Taormina, which can be done by plane, train, bus or car. By car, you take the A18 Autostrada, but, for me, driving a car in Taormina’s narrow streets is too stressful. Rather take the train and then the bus.

Your nearest international airport is Catania.