The Castle of Exilles
Haunted by the Man in the Iron Mask?

From 1681 to 1687 the Castle of Exilles became the famous castle where the “man in the iron mask” was imprisoned. Some say the castle is still haunted by his ghost... 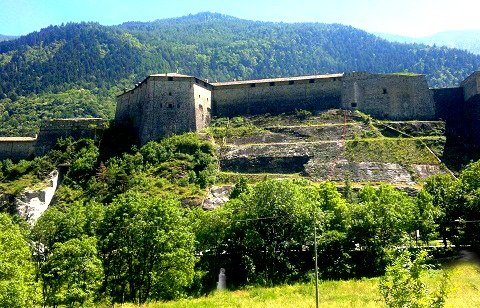 I saw the film - The Man in the Iron Mask - but apparently the film and reality are not too closely linked and no one is sure who the poor guy was. A lot of theories abound but no one really has the answer.

His ordeal comes vividly to life as you tour this castle but watch out you don't bump into his ghost, he is said to stalk the corridors and dark corners.

Getting to the Castle of Exilles

Easy to get to from Turin - if you have a car! The castle is a 70 Km drive. Take the A32 Frejus Autostrada and take the Susa exit. You then follow the SS24, direction Monginevro, and after 15 Kms you'll see it.

During winter (4 October to 6 April) the hours are:

A Bit of History

The Castle of Exilles in Piedmont is located in an area of Piedmont considered of extreme strategic importance dating back to before Roman times. The castle defended the key way from Piedmont to Provence via Monginevro.

It is another one of those amazing places in Piedmont that haven’t yet been discovered by the mass tourist market. I feel guilty about promoting some of these place at times.

The original castle construction dates back to 1155 when the count of Albon wished to exercise control over the western reaches of his kingdom.

In 1601, with the adjusting of the Savoy border, the castle was further modernized by the engineer Jean de Beins in order to better resist artillery fire.

It didn't do much good though because the French nearly destroyed the place in 1796. It was subsequently reconstructed in 1818 and was used by the military even up until the end of WW2.

A Tour of the Castle

The castle was built on three defensive levels and once past the first defensive level and entering through the Royal Gate you come across the pit which is 70 metres deep and took four years to dig.

Next continue up to the Cortile del Cavaliere. This austere area is now used to host summer "concerts in a castle", not a bad idea and something that definitely succeeds in adding a little levity to the sombre mood of the castle.

On with the tour continuing through the labyrinthine passages of the castle. It takes in the armory and the dungeons and includes the royal battery and the Stairs “to paradise” that lead up to the Cortile delle Galere and from here to the attics and the roof with extraordinary view across the Val di Susa (click for article).

All in all the castle is a great Italian castles and one of the highlights of a Piedmont tour.

Visit before the masses discover it.

Return to the Secret Italy Index