Article shared with us by David Gerstel. A New York Times published writer who now spends the good part of his year in Sarnano.

Italy has thousands of Christ on Cross statues. There must be more than a thousand in the Province of Le Marche. This is the story of a single statue on the side of the road and the effect on an American living in the country. 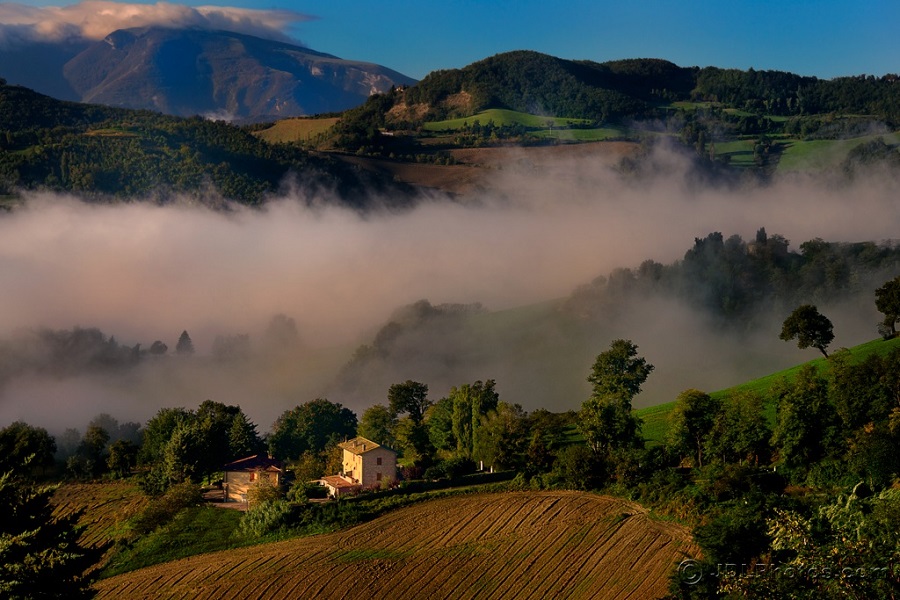 Between Sarnano and San Ginesio in the province of Le Marche on the two-lane asphalt provincial secondary road that wanders a bit and rises to a low hill with a few houses and nondescript apartments is a borgo identified on the touring club map as Gabella Nuova, with a speed control camera next to receptacles to collect used cooking oil and food scraps.

There is a statue of Christ on the Cross at the one intersection that leads into the mountains to the Monastery of San Liberato four kilometers away, built a thousand years ago and later sold with large amounts of land to a neighboring municipality, hidden in the woods of Montre Ragnolo at 750 meters above sea level, now uninhabited after the recent earthquakes.

In earlier times there may have been another emblem of faith, perhaps a cairn of rocks. This particular cross and figure were placed here 75 years ago after a war which may have destroyed the faith of some in God and church but most assuredly destroyed belief in Man.

For reasons unknown in the current century it stood without inscription or attribution, without the graveled, grassed, and flowered border now surrounding it to mark a shrine. In recent years it has become a signpost, a place to turn when you wanted to find the now closed home style restaurant farther up the hill on the rutted dirt road.

The cross stands at a diagonal off the road backed by two small ordinary apartment buildings, seeming to direct the traveler toward the mountains away from the road of commerce to the silence and contemplation of a silent greenspace extending for countless kilometers, a sanctuary forest where wild boar, bear and eagles are at home and Man is an occasional visitor.

The statue appears to be of bronze casting. I am sure it is not. I prefer the deception of material so that I can create my own dating and mentally position the cross and figure into a past century of horse-drawn wagons and sheep being herded between fields guarded by maremannos, a time of fewer people traveling who leave their familiar villages with reluctance.

In the current century, two millennia from the birth of this figure, he looks down from the cross with arms stretched in pain with a composed and peaceful face.

He does not acknowledge the passing vehicles.

From his ankle hangs a small chain with a cross at the end, highlighted by an ordinary window glass stone reflecting the head lamps of oncoming cars. Over time from a distressed truck, black exhaust darkens his face and brown patinaed arms.

The motorcycles in line on tour vibrate the ankle bracelet, buses stir and lift the road debris. Around the cross is a rectangle of white, fenced with black metal spikes, flowers that hang in pots. 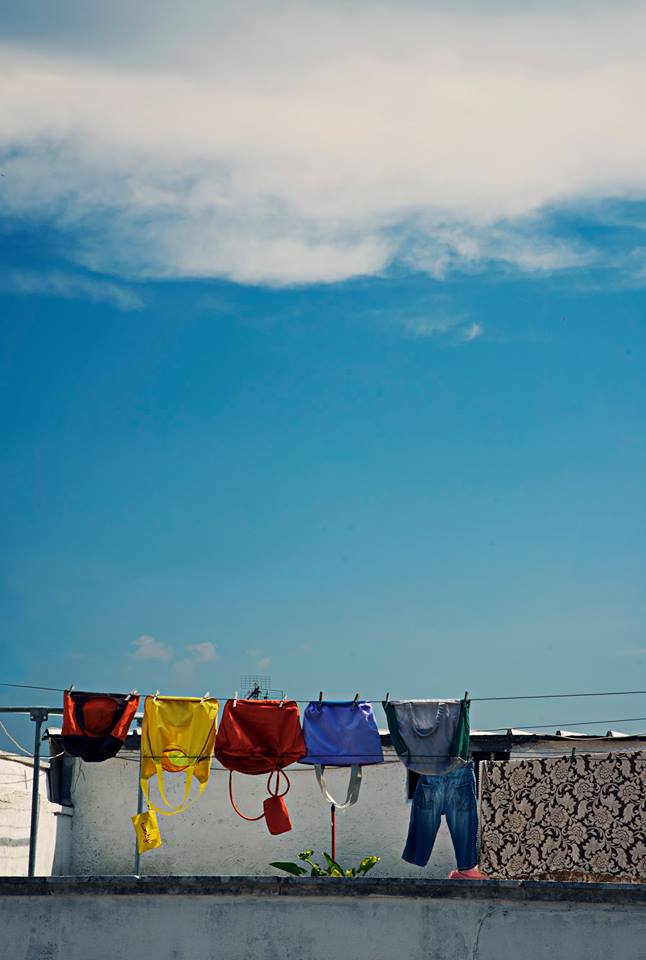 Behind him there are small apartment buildings where drying sheets and underwear wave in the wind and the strong and unshaded sun. They might be flags and banners.

The apartments have balconies where people stand and watch the passing traffic and decades. There might be multitudes of people, citizens and centurions with peaked polished helmets and red plumes.

Across the road are garden plots, tended with hand tools by old men, bent by age and the repetition of years.

He long has stood there, blessing the walking, the driven. Like the buildings and gardens, he sees the seasons change from snow and ice to the heat of high summer when man and creature shelter in the shade of trees and boulder walls.

Past him have traveled merchants and pilgrims, soldiers and clergy, homeless and wealthy.

In the recent war, soldiers marched and were driven in open trucks. Today the cars have windows up and the people do not speak or look. They have the air conditioning on and speak into their cell phones.

When I cycle beneath his glance in the morning, I always look up, seeking an acknowledgment. I have never seen any change in the brow shadowed eyes. Each time I have tried to understand his pain and solitude.

I have wondered if he knows the world that passes before him. I have asked myself why he came to be in this place, whether the church or the citizens wished him to be a minder. I have never seen anyone on foot speak to him, either for prayer or direction. He stands and watches without comment.

Once in a while hikers pass on the way to the national park and their campgrounds. They carry knapsacks and walking sticks. After a glance, they turn onto the dirt road and stride away with purpose.

They do not look back.

Sometimes when I have ridden a long way and am tired from the uphill climb I stop and take a drink from the plastic bottle mounted on the bike frame. When I do not stop, I open my arms for a moment, a small recognition and a salute. Then I push on down the hill to the piazza in Sarnano. 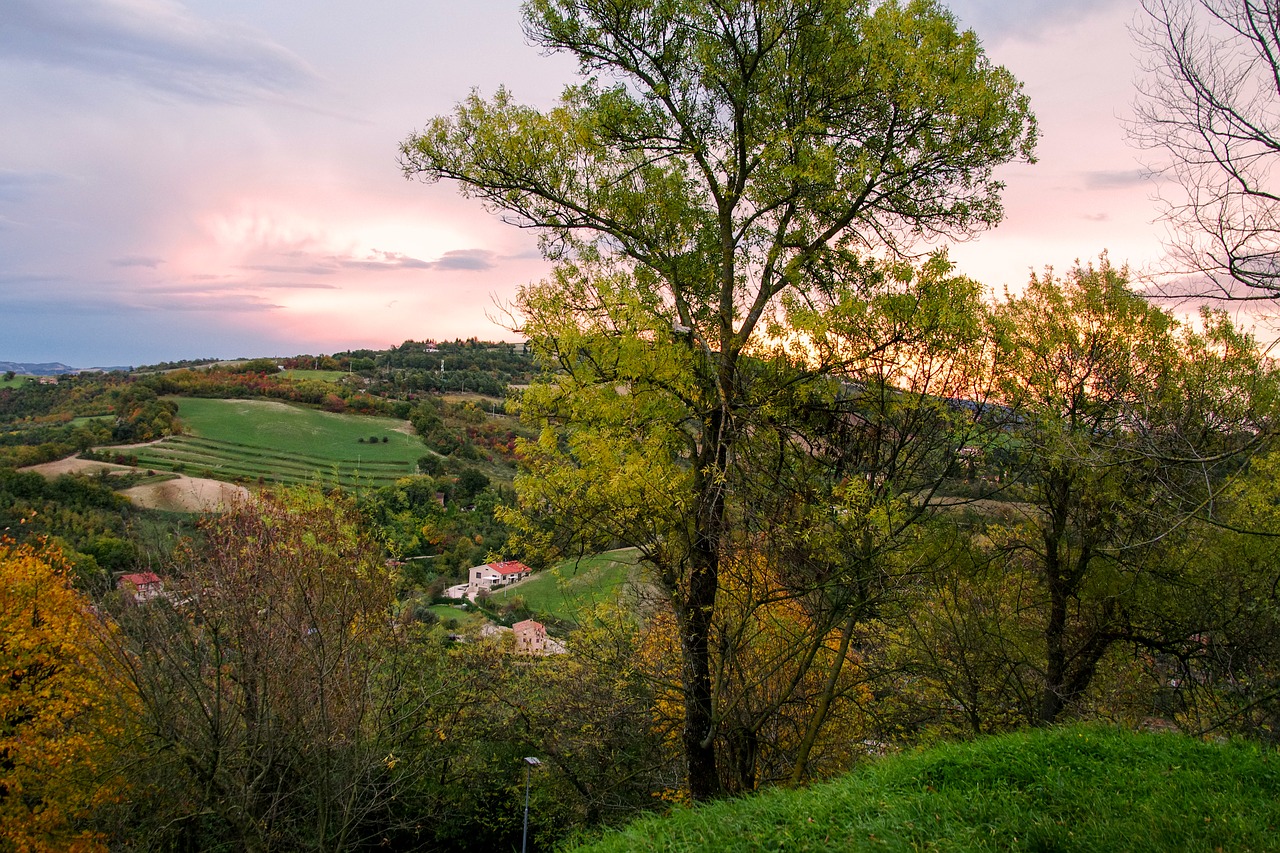 In winter the days are shorter and occasionally I arrive as the sun goes down. On those occasions the dusk deepens quickly and the clouds move over him; he is striped with light and shadow.

The effect is one of melancholy.

Memories come like wind-pushed mist, my past, his past. On those days I feel close to him. His eyes look down but past. I have seen moisture fall from his chin and fingertips, tears to the ground, small splashes, even when the weather is dry and the sky clear.

There are times the cross and figure are just part of the landscape. Perhaps he is content to be ignored.

In the rain and snow, no one comes to fill the puddles or plow the rolls of drifting white powder. No one removes the branches and the leaves pushed against the cross's base by the wind. There are years between cleaning.

In the cold when I ride and stop I feel closer. He stands above and distant. On the road he is a marker, 5 kilometers from one town, 1000 years to another time. The friars of San Liberato in their monastery would be pleased. If the sky is crystal and the moon bright, stars surround us and add a crown above his thorned head.

The inattention that people pay is a quality that appeals to me. He is distanced from our world. His peace joins us on the small hill. We are connected by a line of flickering candles secured to an invisible string.

Believers may be few. The congregation is small. On a quiet road he stands as friend and protector.